I have A LOT of thoughts on the horrible Supreme Court ruling pertaining to the oral contraception mandate. This is just one of many posts on it.

In the past I have discussed my issues with the “Food Babe” and her stances that she takes on food. One of the most egregious items was when she said that Subway sandwiches should eliminate a certain chemical from their bread because that same chemical is found in yoga mats and who wants to eat yoga mats? Seriously, she is that stupid. Well, her argument unfortunately worked and Subway caved.

So how is Hobby Lobby like the “Food Babe”? Well, in their argument they are saying that they are opposed to “their money”* being spent on abortifacients. They then claim that these oral contraceptive measures cause abortions. They provide no proof of this. They offer no scientific evidence that these pills cause abortions, They just believe it to be so, much like the Food Babe believes it to be so that you are eating yoga mats when you ate a Subway Sandwich. Just as the Food Babe didn’t provide evidence that the ingredient in the bread was harmful and instead used beliefs to push her agenda, Hobby Lobby never provided evidence that coverage of these pills harms them under their freedom of religion since they never proved abortions are caused by these pills.

These kinds of nitwit arguments are dumbing down our country and they need to stop.

I have A LOT to say about the Supreme Court ruling against the oral contraception mandate that was made today and expect many posts to come about that issue in the days to come and as half of the podcast on Wednesday. But I didn’t want to overlook the horrible ruling the Supreme Court made the other day about buffer zones.

A lot has been said about this already. My main argument is this. The court seems to believe that people have the right to give counsel to others on the sidewalk. I disagree. The people should have the right to OFFER counsel to those who wish to hear them. People should also be free to not listen. You do not have the right to have me as a captive audience. If I am trying to get from point A to point B you should not be free to impede my way nor should you be free to force the words that you want me to hear into my ears. Your offer of counsel can be provided at a distance with a big sign that says :”if you want to talk to me about your choice to have an abortion, please come over here”. Individuals seeking an abortion would then be free to walk over to the person and engage in a conversation if they so choose. If they do not choose, then they can just walk into the clinic for whatever business they wish to conduct.

The Supreme Court made a good ruling this week and I discussed it on my show. It required that law enforcement obtain a warrant before searching a cell phone and that it was not the same as searching a wallet. That was a good ruling. But we had two bad rulings. One was the ruling that President Obama violated the Constitution by his appointing three people to the National Labor Relations Board during what he believed was a Congressional recess. The other ruling struck down a buffer zone law that required people protesting abortions to stay back a certain number of feet even if they were on public property (like a sidewalk). I will deal with that second ruling in another post.

In the ruling of the non-recess appointments the Supreme Court had ruled that a 3 day recess was not a long enough recess to justify a recess appointment. Arbitrarily Justice Breyer said that a recess less than 10 days would be too short. I am not exactly sure where that figure comes from, since no where does the Constitution place a requirement on the number of days a recess might be. There has been a tradition of Presidents not making such appointments during breaks less than 10 days. That tradition is not found in any law. However, I guess a line has to be drawn somewhere so that isn’t my issue with the ruling.

My issue with the ruling is the trampling or even usurpation of the Presidential authority to make recess appointments by making bogus “pro-forma” sessions in order to block such appointments. What happened in this case is that the House required the Senate to have meetings called “pro forma” sessions of the Senate every third day in order to keep the President from saying that the Senate was actually in recess. What happened during these sessions? One Senator came in and banged a gavel. That’s it. No business was conducted. So how on earth can the Supreme Court justify calling such meetings an interruption of a recess? It is just absurd.

The ruling could have been worse. According to the minority opinion they believed that recess appointments should only happen if the vacancy starts during the recess. This is the wording of the Constitution on the matter:

The President shall have Power to fill up all Vacancies that may happen during the Recess of the Senate, by granting Commissions which shall expire at the End of their next Session.

It seems to me that all that the Constitution requires is for the vacancy to exist during the Recess of the Senate (i.e. it must be happening during the recess). It doesn’t require the vacancy to start in that vacancy. But saying it could have been worse does not make me feel better about a bad ruling. The idea that one person banging a gavel in the Senate because the House requires it is enough to call it no longer a recess is a trampling of a constitutional authority of the President and that the court couldn’t see that disturbs me greatly.

You can check it out here. It was a very good show and we have a very good discussion. It is 2 hours but I highly encourage you to listen.

Bobby Jindal is still up to no good, including discussing the idea of a “hostile takeover” of the US. I will continue my review of him and his leadership of the stupid party.

Front and center of the stupid party is the tea party. When Senator Cochran defeated tea party candidate Chris McDaniel in the GOP primary runoff in Mississippi, he did so by reaching out to Democrats in black communities. The response by the tea party folks is amazing and shows why they continue to have a perception problem (if not a problem in reality).

Finally, the Supreme Court made a very big ruling on privacy rights today. Even better is that the ruling was unanimously reached. I will go into that subject as well.

All those issues, headlines, tweet of the week, and more Wednesday at 8pm Central on Liberal Dan Radio: Talk From The Left, That’s Right.

There are a lot of Game of Thrones memes. I have not seen anything like this so I had to make it. 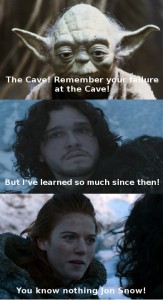 From Benghazi to small government only when they want it to be, the GOP continues to live up to the label that Louisiana Governor Bobby Jindal called it when he said that they needed to stop being the “stupid party”. But not even Bobby Jindal is immune to the stupidity as he unleashes more horrible legislation on the state (which is even worse than how I described it last week). So today I review the stupidty and show why Bobby Jindal is the person spearheading the increase of stupidity in the party instead of the one eliminating it.

Those issues, headlines, tweet of the week and more at Wednesday 8pm Central on Liberal Dan Radio: Talk From The Left, That’s Right.

Back from vacation and so much to discuss. Louisiana Governor Bobby Jindal signed a bill into law that seeks to retroactively strip the ability of local flood protection agencies to sue oil companies for damage done to the flood protection system by their drilling processes. So much for the free market. This smells more like protectionism. I will go into why this is a bad idea and why this decision is similar to what happened in Oklahoma .

Louisiana also embarassed itself by requiring doctors to keep a dying pregnant woman alive, despite any advance directives, in order to allow her to be a breeding vessel. I will briefly cover this and the other law that required doctors to have admitting privileges in nearby hospitals.

But the main point of discussion this week will be the stunning loss of Eric Cantor, House Majority Leader, in a primary election. All through my attempts to push the #RetakeCongress I have said that no election should be taken for granted. I have discussed the desire of the media to mock underfunded candidates in order to prove that money is needed to win elections (specifically money to buy their advertising). I have discussed why it is vital to get out and vote in every election. Cantor losing puts a huge exclamation point and should clearly show why it is vital to not sit at home on election day.

Those issues, headlines, tweet of the week and more at 8pm Central on Liberal Dan Radio: Talk From The Left, That’s Right.

Try Ionos web hosting and get up to $150 in rewards!